In the first part (here) we’ve designed, trained and evaluated a very simple NN with 3-inputs and 1-output. It will make more sense if you have a look at the first post before continuing with this.

So, in this post we will design a bit more complex (but again simple) NN and we’ll do the same procedure like the first part. Design, train and evaluate. For consistency and make it easier to compare, we’ll use the same inputs and training set.

The MCUs that we’re going to use are the same one with the previous post.

Everything that is related to this project for all the article parts are in this bitbucket repo: 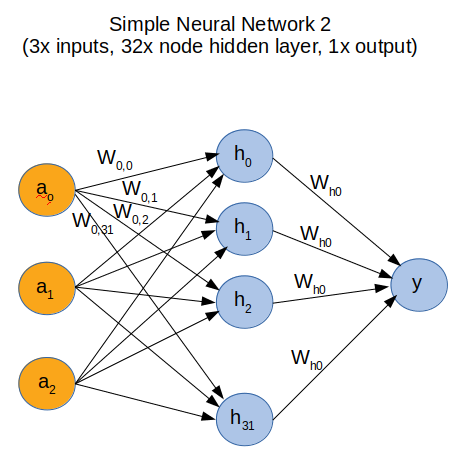 You see that not all 32 nodes are displayed in the picture, but only h(0), h(1), h(2) and h(31). Also I haven’t added all the weights because there wasn’t enough space, but its easy to guess that they are similar with the ones from a(0).

As the inputs are the same, the same table with all possible 8 input sets stands as before.

To train this model is a bit more complicated than before. You can open the `Simple python NN (1 hidden).ipynb` notepad from the cloned repo in your Jupyter browser or you can just view it here. The python code seems almost the same but in this case I’ve made some changes to support the hidden layer and the additional weights between each layer.

In step 2. in the notebook you can see that now the weights are a [3][32] array. That means 32 weights for each of the 3 inputs. That’s 96 weights only for the first two layers, plus another 32 weights for the next, which is total 128 weights! So you can imagine that this will need a lot more processing time to calculate and also that this number can grow really fast the more hidden layers or nodes/layer you add.

After we train the model we see some interesting results. I’m copying them here:

Let’s see again the results from the previous post.

It’s not always necessary that the more complex a NN is will make better predictions. Actually, it might be the opposite. If you want to dig deeper you can have a look about NN over-fitting. Most probably even in this second case with the 32-node hidden layer, the model is over-fitting and maybe 8 nodes are more than enough, but I prefer to test this 32-node hidden layer in order to stress the MCUs with more load and get some insight how these little boards will cope up with that load.

Evaluate on the MCUs

Now that we designed, trained and evaluated our model on the Jupyter notepad we’re going to test the NN on different MCUs.

What is important here is not if the evaluation really works on the MCUs. I mean that’s just code and of course it will work the same way and you’ll get similar results. You results may just differ a bit between different MCUs, because as we’re using doubles and the accuracy may vary.

Regarding the NN prediction implementation in the C code, just have a look at the test_neural_network2() and benchmark_neural_network2() functions in the code. The rest is the same as I’ve described in the first post.

For this post the START=2command was used in order to execute the benchmark with the second simple NN. In the previous post the benchmark results were obtained with the START=1command. Keep in mind that if you want to switch from one mode to another you need first to send the STOPcommand.

You can find all the oscilloscope screenshots for the prediction benchmarks in the screenshots folder. The captures are the ones that have the simple2 in their filename. In the following table I’ve gathered all the results for the prediction execution time for each board. As the second NN takes more time you can ignore the toggle time as it’s insignificant. Here are the results:

As you can see from the above table I’ve lost the results for the Arduino Leonardo. But who cares. I mean it’s boringly slow anyway. I may try to re-run the test and update.

Now let’s think about a real-time application. As you can see the prediction time now has increased significantly. It’s interesting to see how much that time has increased. Let’s see the ratio between the NN in the first post and this.

Let’s explain what this ratio is. This number show how much slower the second NN execution is compared to the first NN for the specific CPU. So for the stm32f103 the second NN needs 41 times the time that the first NN needed to predict the output. Therefore, the bigger the number the worst effect the second NN had on the MCU. On those terms, the stm3f103 seems to scale much more worse than the stm32f746 and the esp8266. The stm32f746 and esp8266 really shine and scale much better that any other MCU. The reason I guess, is the hardware FPU that those two have, which can explain the ratio difference as the NN is actually just calculating dot products on doubles.

Therefore, here we have a good hint. If you want to run a NN on a MCU, first find one with a hard FPU, like Cortex-M4/7 or esp8266. From those two, the stm32f746 of course is a much better option (but that depends also the use case, so if you need wifi connection then esp8266 is also a good option). So, coming back to real-time applications we need to think that the second NN is also a simple one as we only have 3 inputs. If we had more inputs then we would need more time to get a prediction. Also the closer we get to the millisecond area that already excludes most of the MCUs from any real-time application that needs to make fast decisions. Of course, once again it always depends on the project! If for example you had a NN that the inputs were the axis of a 3D-accelerometer and you had a trained model that needed to predict a value according to the inputs, then maybe 700 μsec or even 500 μsec are ok. But they may not! So it really depends on the problem you need to solve.

After finishing those tests I had mixed feelings. That’s because I’ve managed to design, train and evaluate two simple NN models and be able to test them successfully on all the MCUs. That was awesome. Of course, the performance is different and depends on the MCU. So, although I see some potentials here, at the same time it seems that the performance drops quite much as the model complexity increases. But as I’ve said it depends in the real use case you may have. You might be able to use an MCU to run the predict function, you might not. It all depends on the real-time requirements and the model complexity.

Let’s keep the fact that the tools are out there. There are many different MCUs, with different processing power and accelerators that might fit your use case. New Cortex-M cpus are now coming with NN accelerators. I believe it’s a good time now to start diving into the ML and the ways that it can be used with the various MCUs in the low embedded domain. Also there are many other HW platforms available in the market, like FPGAs with integrated application CPUs that can be used for ML. The market is growing a lot and now it’s a good time to get involved.

Update: next part is here.

Until then have fun!

I am still not clear some points, need read again. BTW, many thanks for your sharing ^^

Thanks for the feedback!

Reply
wpDiscuz
Every site use cookies. You see this message because of EU GDRP. Personally I use Ghostery and AdBlock and I don't even trust my domain. Please use any blocker tool regardless.Ok