A small post for one of the more beautiful and useful macros in C. I consider the container_of() macro to be the equivalent of the Euler’s identity for the C language. Like the Euler’s identity is considered to be an example of mathematical beauty, the container_of is considered to be an example of C programming beauty. It has everything in there and it’s more simple than it looks. So, let’s see how it works.

The container_of macro is defined in several places in the Linux kernel. This is the macro.

That’s a mess right. So, lets start breaking up things. First of all, there are other two things in there that need explanation. These are the typeof and the offsetof.

The typeof is a compiler extension. It’s not a function and it’s not a macro. All it does is that during compile type evaluates or replaces the type of the variable that the typeof() has. For example, consider this code:

then, the compiler will replace the typeof(tmp_int) with int, so the above will be the same as writing this:

The offsetof is another beautiful macro that you will find in the Linux kernel and it’s also defined in several places. This is the macro

The purpose of this function is to retrieve the offset of the address of a member variable of a structure. Let’s make that more simple. Let’s consider the following image. 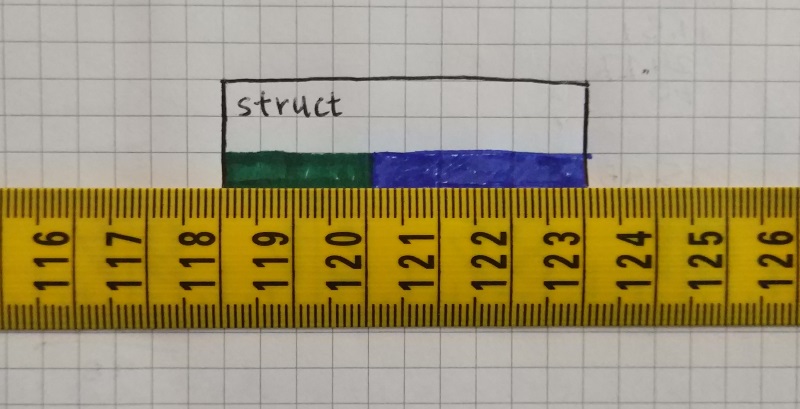 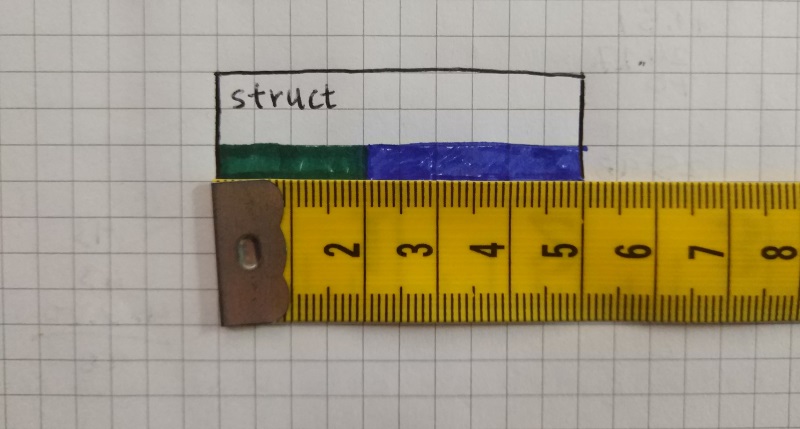 What happened now? You see it’s the same structure but now I’ve slide the tape measure so the offset of the struct starts from zero. Now if I ask, what’s the offset of the blue member, then the answer is obvious and it’s 2.

Now that the struct offset is “normalized”, we don’t even care about the size of the green member or the size of the structure because it’s easy the absolute offset is the same with relative offset. This is exactly what &((TYPE *)0)->MEMBER does. This code dereferences the struct to the zero offset of the memory.

This generally is not a clever thing to do, but in this case this code is not executed or evaluated. It’s just a trick like the one I’ve shown above with the tape measure. The offsetof() macro will just return the offset of the member compared to zero. It’s just a number and you don’t access this memory. Therefore, doing this trick the only thing you need to know is the type of the structure.

Also, note that the 0 dereference doesn’t declare a variable.

Ok, so now let’s go back to the container_of() macro and have a look in this line

So the code for the example with the tape measure becomes:

Think about the tape measure example and try to evaluate this:

Well, there are a few issues with the container_of() macro. These issues have to do with the some versions of gcc compilers. For example, let’s say that you have this structure:

If you try to do this:

Then if you have a GCC compiler with version 5.4.0-6 then you’ll get this error:

Instead if you do this:

Then the compiler will build the source code. Also, if you use a later compiler then both examples will be built. Therefore, have that in mind that the type checking thing is mainly a compiler trick and needs the compiler to handle this right.

container_of() and offsetof() macros are a beautiful piece of code. They are compact, simple and have everything in there. In 3 lines of beauty. Of course, you can use container_of() without know how it works, but where’s the fun then?

Really well done and explained! I already knew about container_of() but your explanation was one of the best I’ve seen out there. And nice example using the measure tape! For sure it wasn’t a waste of internet space.

It’s a great explanation and Thanks for posting. I simply loved it. I’m scared to understand the kernel macros but your explanation gives me a hope to explore and understand.

Thanks for the feedback. I also need to find intuitive explanations for myself, otherwise I forget very fast. Good luck with your quest!

Counterpoint: container_of is an abomination